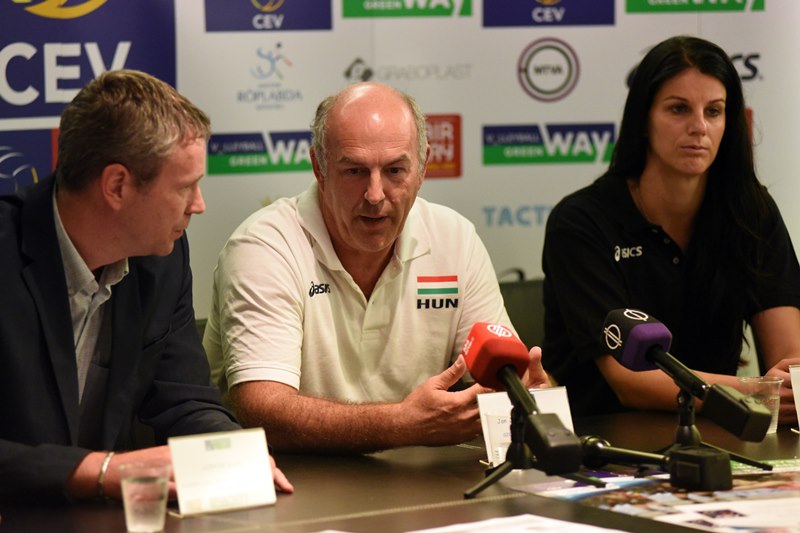 On Thursday a press conference was organised in Budapest to introduce the national media to Hungary women’s national team’s campaign in the 2015 CEV Volleyball European League. The players around Belgian-born coach Jan De Brandt will make their home debut next week when they host rookies Georgia for two matches to be played in the city of Békéscsaba.

As they start their campaign in the League Round, Hungary will be playing three rounds at home and another two away. After the matches with Georgia scheduled for August 1 and 2, they will then travel to Ankara to play Turkey on August 7-8 before another two home rounds follow on August 15-16 and 22-23 in Erd, where Hungary will be hosting Greece and Israel, respectively. Their final double matchup in the pool phase will then follow on August 28-29 when they play Poland in the city of Zawiercie. The good news is that the Hungarian National Television will be broadcasting live all of Hungary’s home matches.

Mr Zsolt Ludvig, who is the chairman of the Organising Committee, said: “The European League is the second most important competition for national teams in Europe and the organisers are expected to comply with strict and demanding rules. As our Federation can count on the help and support of valuable partners, Hungary’s national team has been put in the position to have the best possible preparation and organisation of its home rounds. We hope that our team will make it through the League Round and move on to the semis which would be played in Szombathely. If our team makes the final, our home match would then be played in Budapest.”

“We have been working together for about four months and we have entered the second stage of our preparations for the European League,” Jan De Brandt said. “The most important thing is a successful participation in the European Championship later this year,” he added as Hungary is returning to that stage for the first time since 1987. “We have set out three important goals: first, we want to further develop all players on the roster; secondly, we want to build a good team and finally we want to stretch this positive trend to late September so that we can get a good seeding and perform well also at the qualification round for the 2017 European Championship which is due to take place next year,” the Belgian mentor added.

Team captain Rita Liliom said: “Apart from the heat, the team is in a good mood and the ambiance is very positive. We have only one major goal which is to perform well at the European Championship later this fall in Belgium and The Netherlands.”

Renata Sandor, currently Hungary’s most successful player on the international stage, concluded: “It is important to participate in the European League and to do well there but this is only a first step on our way to the European Championship. Actually we want to be in our best shape there. It’s already a great success that we have qualified for the Final Round but we would like to make it through the group stage. After that every additional match we get to play will be a great experience.”